Message from the new President

The message is included in the December 2013 ISSMGE Bulletin

It is a great honour and privilege for me to have been elected by the Member Societies of ISSMGE as your President for the 4-year term from 2013 to 2017. The election took place during the Council meeting, just before the opening of the 18th International Conference on Soils Mechanics and Geotechnical Engineering (18 ICSMGE) in Paris, 2-6 September 2013.

Before updating you with the various matters which might be of interest to you, I would like to acknowledge the great work and achievements of my two predecessors, President Pedro Sêco e Pinto and President Jean-Louis Briaud. I was a member of the Board during their two mandates and it was a real pleasure to work under their leadership, with the efficient assistance of our Secretary General Neil Taylor. My deep gratitude also goes to the many officers of ISSMGE and to all of you who made ISSMGE what it is. Now, I am “in charge”… I feel that it is truly a great challenge for which I shall devote all my possible energy and enthusiasm.

I have chosen to express my news, comments and ideas in these columns of our ISSMGE Bulletin because I feel that is the natural channel for communication between us. It will be my main channel of communication during my mandate.

As the new President, I have to comment first on the 18 ICSMGE, held in Paris, trying to be the judge and no more the party! Some 2000 scientists from 100 countries participated in the event (1875 colleagues, exactly, were registered for the scientific sessions – see report by the French Society CFMS in this issue of ISSMGE Bulletin). For many of the participants, I understood that the Paris Conference was a real success. This is the best reward for the French Society (CFMS) which worked very hard for the event during the past 4 years. One of the main lessons to be drawn concerns the mobilisation created inside ISSMGE itself, through its Technical Committees (TCs) and their Officers. Indeed, not only were the TCs involved with selecting 7 honour lecturers for the plenary sessions (following the wish of Jean-Louis), but were also in charge of organising the scientific content of all the parallel sessions (discussion sessions, poster sessions and workshops). This resulted in a very high scientific level for all the sessions, which was recognised by many of the participants. I wish to thank here all the contributors, in the plenary sessions and in the parallel sessions, for the quality of their presentations and for the dedication they showed to ISSMGE. I shall certainly examine, as soon as possible, with the Board and with the organisers of the 19th ICSMGE in Seoul (2017) if we can, and how we can repeat this successful involvement of ISSMGE TCs.
The 5th International Young Geotechnical Engineers’ Conference (iYGEC 2013) held just before the 18 ICSMGE was also a great success. It brought together 164 participants from 57 countries – see report by Yu-Jun Cui, Chair of the iYGEC OC in this issue of ISSMGE Bulletin).

Let me introduce to you the new ISSMGE Board and its 12 members (see: /the-society/board). Apart from the President, the immediate Past President (Jean-Louis Briaud) and the Secretary General (Neil Taylor), the six Vice-Presidents of ISSMGE now sitting on the Board are: Fatma Baligh (for Africa), Ikuo Towhata (for Asia), Mark Jaksa (for Australasia), Antonio Gens (for Europe), Paul Mayne (for North America) and Jarbas Milititsky (for South America), as well as three members appointed by me after consultation (following the ISSMGE statutes): Marc Ballouz (Lebanon), Etienne Marcelin Kana (Cameroon) and Nicoleta RÇŽdulescu (Romania). Note that, if I am correct, it is the fist time that we have two ladies sitting on ISSMGE Board.
The Board will hold its first in-person meeting in London on 18-19 March 2014, at the invitation of Geotechnical Consulting Group and the British Geotechnical Association. This will allow us to participate in the Rankine Lecture at Imperial College, to be delivered by Professor Guy Houlsby from Oxford University. We are also invited to the Pre-Rankine Seminar held at Imperial College, dedicated this year to Professor Nicholas Ambraseys, who passed away in December 2012. It is intended that the main discussion topics and decisions taken by the Board will be posted on the ISSMGE website by our Secretary General.

The Board has maintained most of the working structure of ISSMGE established by Jean-Louis Briaud. Six of the previous Board Level Committees (BLCs) have been retained and the Chairs have already been nominated by the Board (see:https://www.issmge.org/the-society/working-structure-issmge):
- Awards Committee (AWAC), Chair: Charles Ng (Hong Kong)
- Corporate Associates Presidential Group (CAPG), Chair: Sukumar Pathmanandavel   (Australia)
- Innovation and Development Committee (IDC), Chair: Dimitrios Zekkos (USA)
- Public Relations Committee (PRC), Chair: Sherif Wissa (Egypt)
- Students and Young Members Presidential Group (SYMPG), Chair: Jennifer Nicks (USA)
- Technical Oversight Committee (TOC), Chair: Pierre Delage (France).
The BLCs have resumed their work and are, presently, in the process of updating their membership and reviewing their terms of reference.

It has been agreed that all the six ISSMGE Vice-Presidents will sit on the TOC, in order to facilitate, in particular, the communication and coordination with the TCs (current and planned) hosted by the Member Societies in their respective Region. The VPs have each nominated a colleague from their Region to assist them on the Committee.

Visit to the Victor de Mello library space
Very recently, I had the chance to visit the space of the library of the Polytechnic School of the University of São Paulo (Brazil) devoted to Victor de Mello, President of ISSMGE 1981-1985 (see: https://www.issmge.org/news/past-president-victor-de-mello-passes-away). This space gathers all the books, documents and journals belonging to Victor de Mello. According to our colleague, Waldemar Hachich, Vice-President for South America 2005-2009, the Victor de Mello includes:

My visit to the Victor de Mello space with our colleagues from São Paulo, Waldemar Hachich and Werner Bilfinger (see photo), gave me a feeling of deep recognition of Victor. While I was going through some of his hand-written pencil notes (Victor would annotate most of his books and journals!), it came back to my mind the wonderful moments one would spend in his company. His extremely wide culture, his deep expertise on nearly all topics of geotechnical engineering, his kindness, modesty, permanent concerns about the younger ones and his friendship impressed me each time I had the chance to meet him or visit him.

Bye bye for now! I will soon be back in contact with you in these columns. In the meantime, do not hesitate to write to any one of us, the Board members or the BLCs’ Chairs, if you wish to clarify something or if you wish to raise a question about ISSMGE and its governance! 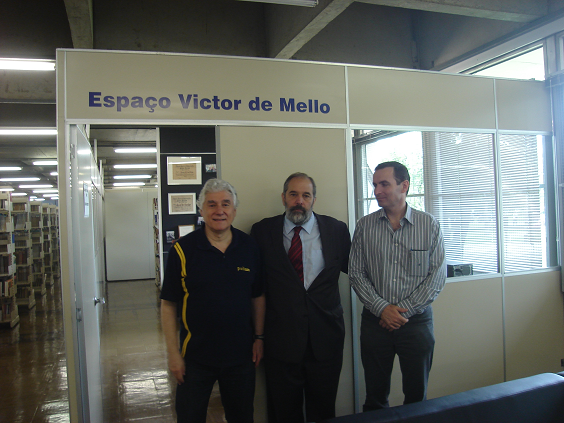 2 October 2013. Waldemar Hachich, Roger Frank and Werner Bilfinger  (from left to right) visiting the Victor de Mello library space in the Polytechnic School of the University of  São Paulo