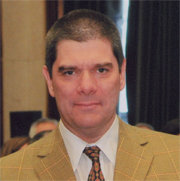 Alejo O. Sfriso was born in 1964 in Argentina. His involvement with Soil Mechanics started at the early age of 10, when he visited jobsites with his father, a geotechnical engineer working in ground exploration. He joined the lab team as a technician when he was 16, and was writing reports when he was 25. He studied Civil Engineering in the University of Buenos Aires, where he graduated as Civil Engineer (1993) and Doctor of Engineering (2010).

His roles at faculty positions began in 1985 as Teaching Assistant and continued until his appointment as Professor of Soil Mechanics and Geology in the University of Buenos Aires. He has authored or co-authored more than 70 papers, has supervised 20+ students, has delivered lectures in several countries in America and has participated in working committees for Argentinian Codes, including those for Geotechnical Exploration and Foundation Design.

He joined the Argentinian Society of Geotechnical Engineering in 1993 and was appointed into its Executive Committee where he served until 2015, when he finished his four years term as President. In this role he participated in the organization of several national and regional Conferences, Workshops and Seminars, including the XV PCSMGE (2015) where he served as Chairman.

He has over 25 years’ experience in consulting and design for infrastructure and mining projects with emphasis in the numerical modelling of construction procedures. As a consultant, he participated in many major infrastructure projects in Argentina and several other countries in Latin America for a wide range of fields including foundations, earthworks, transportation projects, tunnelling, retaining walls, open pit and underground mines, and dams. He is currently Managing Director and Principal Consultant in SRK Consulting (Argentina) and Director in AOSA SA.